In early May, we took a vacation to Boothbay Harbor.  We have driven by this area before, but never stopped in it.  And it turns out that it is worth stopping in.

We stayed at Topside Inn, a fairly large Bed & Breakfast.  It is the largest B&B we have stayed at, with over 20 rooms.  That that does not prevent them from being a true B&B.  The breakfasts here were also the most gourmet of any B&B we have stayed at: they were unusual, tasty, and well presented.  (Next time we stay at a B&B, I will have to take pictures of our breakfasts!)  We won't hesitate to stay here again. 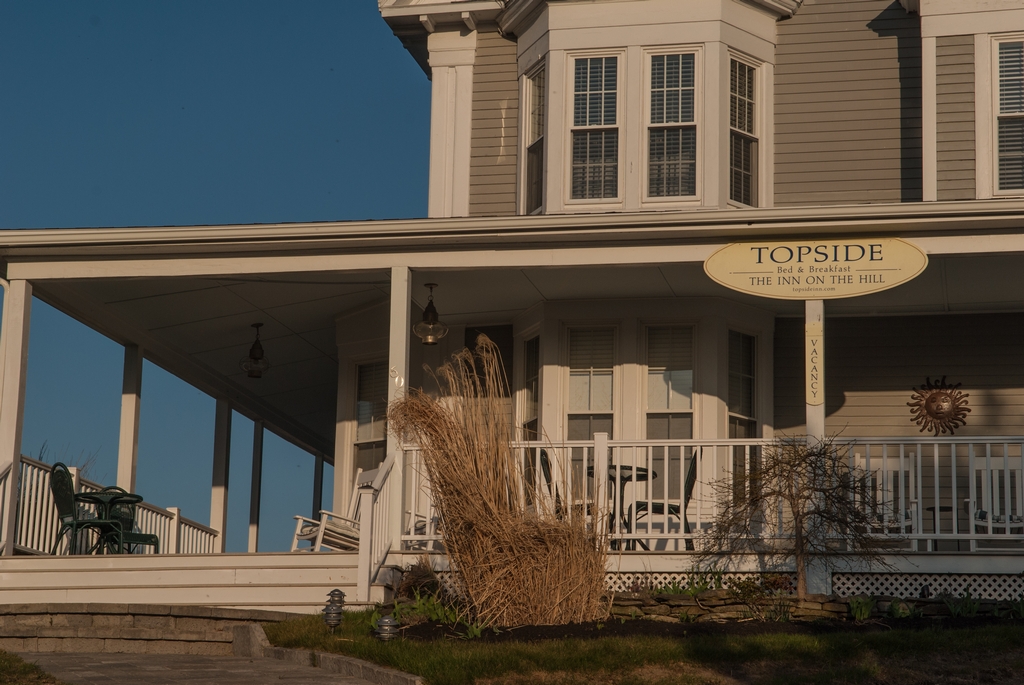 This is the main building; there are also two other buildings that have additional rooms.  The room we had it on the 2nd floor, the two windows on the left in the photo.  You can see we had one open.  And here is the view from the inn (click on the panoramic picture for a larger view of it): 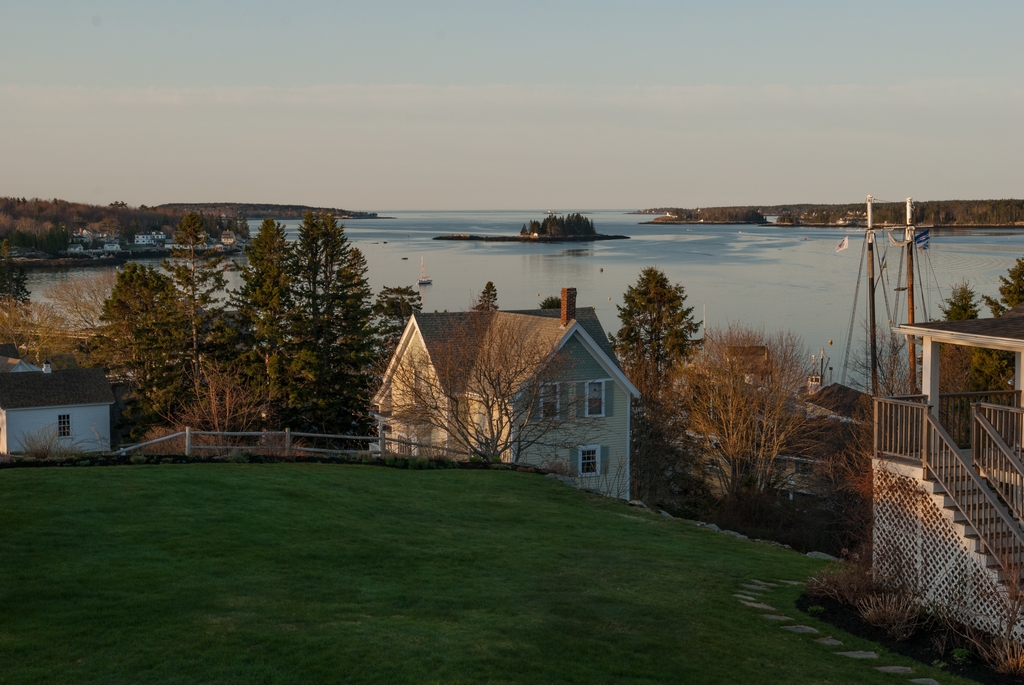 Our room was their largest room, although all the rooms seem fairly spacious.  We had a king size bed with space around it, and an airy bathroom. 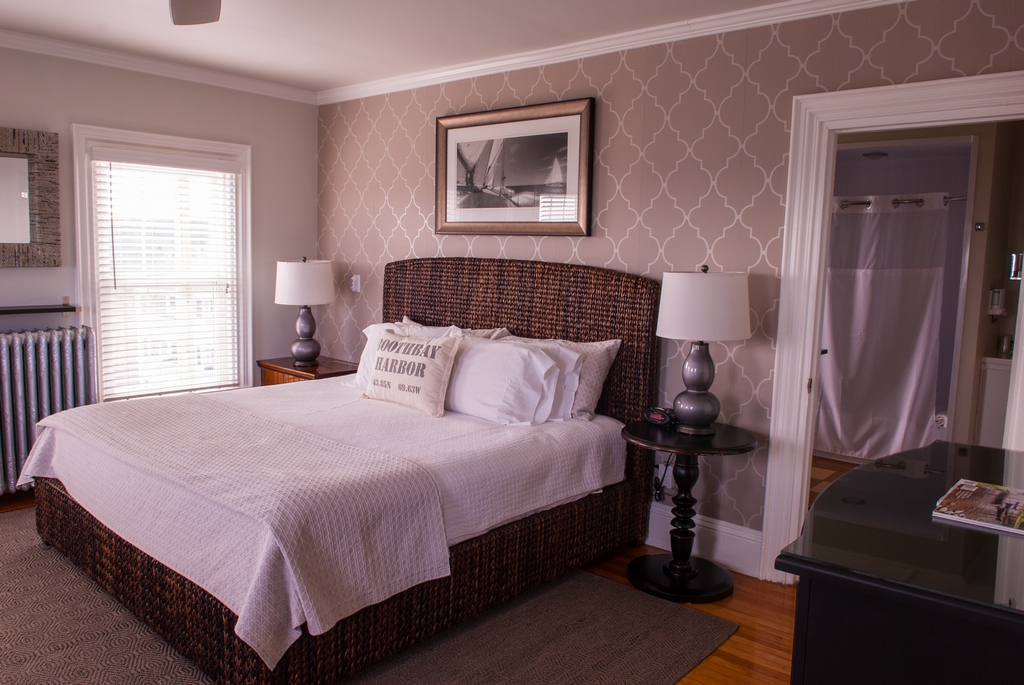 The view from the front deck of the inn: 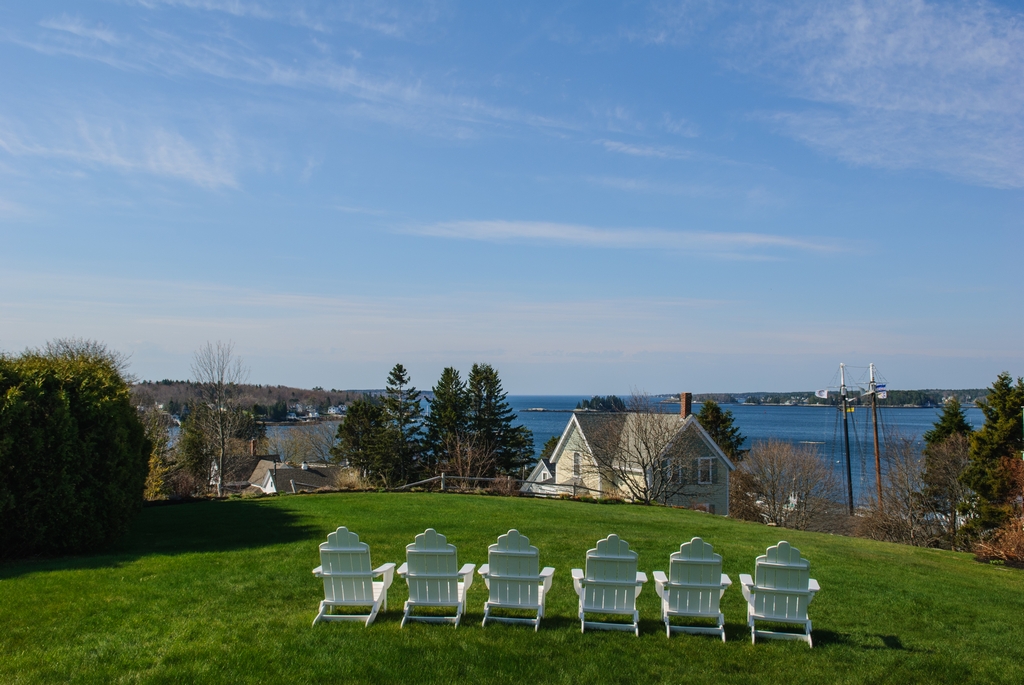 There were a couple cute sculptures that are made from recovered metal.  Here is the inn puppy, tucked under the steps.

And a moose that hung out on the entryway. 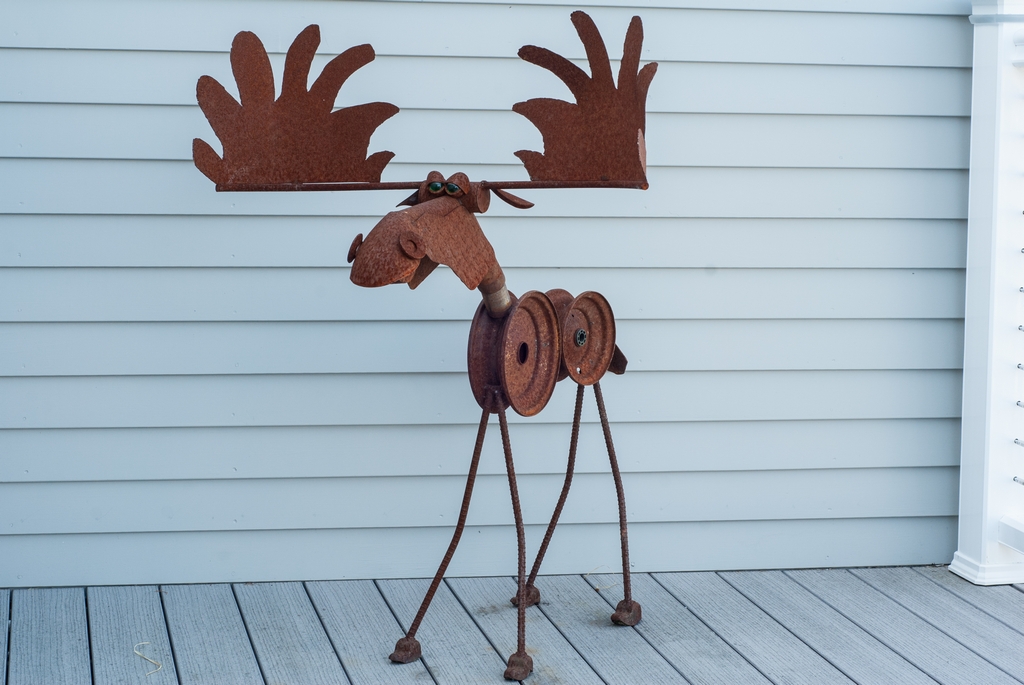 I am really regretting that I did not take pictures of our breakfasts.  They were delicious, and nicely presented.  Every day there were some 'staples' placed out for us.  These included either a fruit cup or half an orange or grapefruit, bread for toasting plus home-made jam or spiced butter, yogurt with very tasty home-made granola, cheese slices, juices, coffee and tea.  Then each day also included an additional buffet item plus a served main course.

All the meals were very tasty.  Breakfast started at 8 AM, which is a little on the late side.  It did allow us to walk to Boothbay Harbor downtown some mornings, though.  This was early in the season for the area, so many of the shops were not open yet ... which suits us just fine, since we don't do much shopping. 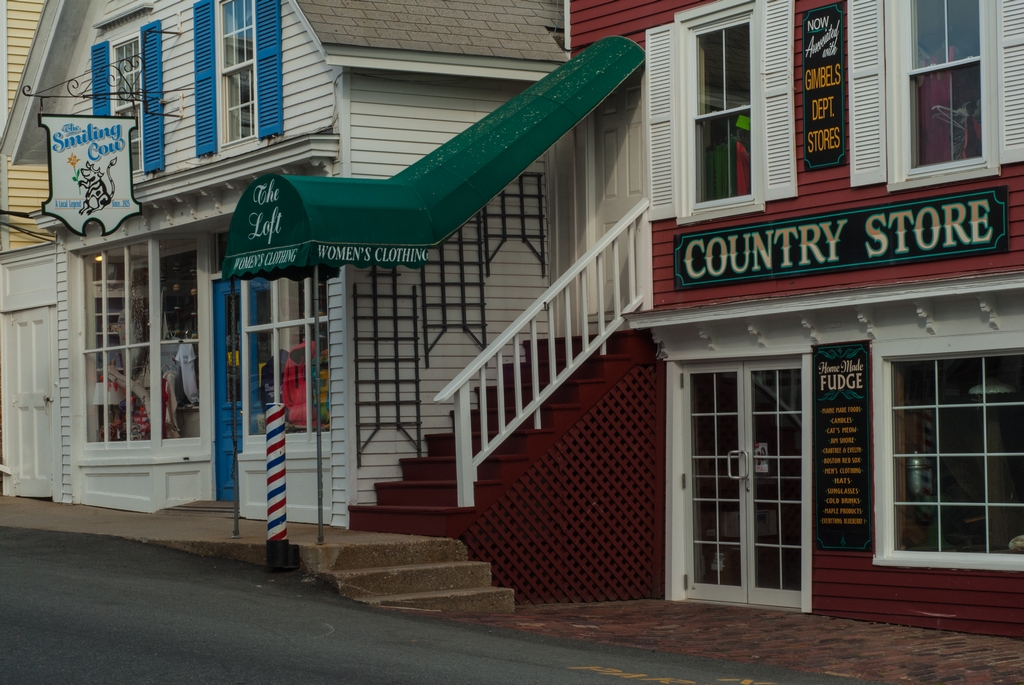 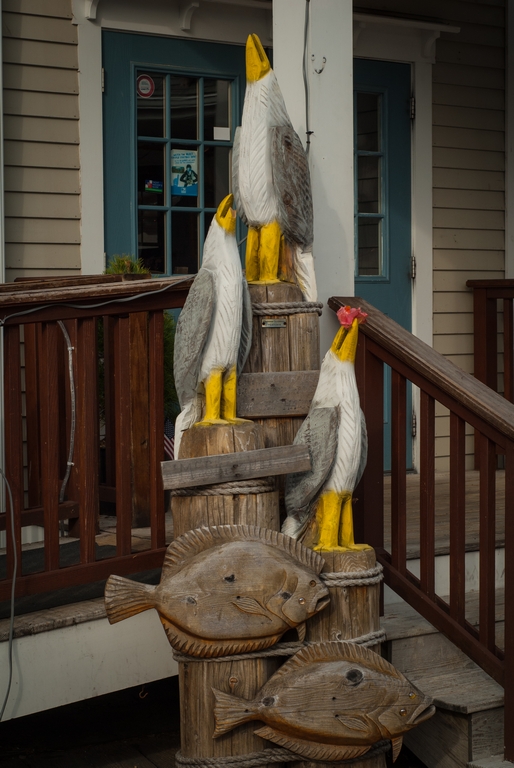 It did mean a slightly limited selection of restaurants, but luckily for us Ports of Italy had just opened for the season.  Mom M had sent us a review of this restaurant from Downeast Magazine.  Everyone must have been waiting for them to open, because it was PACKED.  We sat at the bar and ate there.  This was enjoyable.  We were able to talk to the bartender Melissa; her hands were in the article, holding their signature drink.  We passed on that, though, and went with wine. 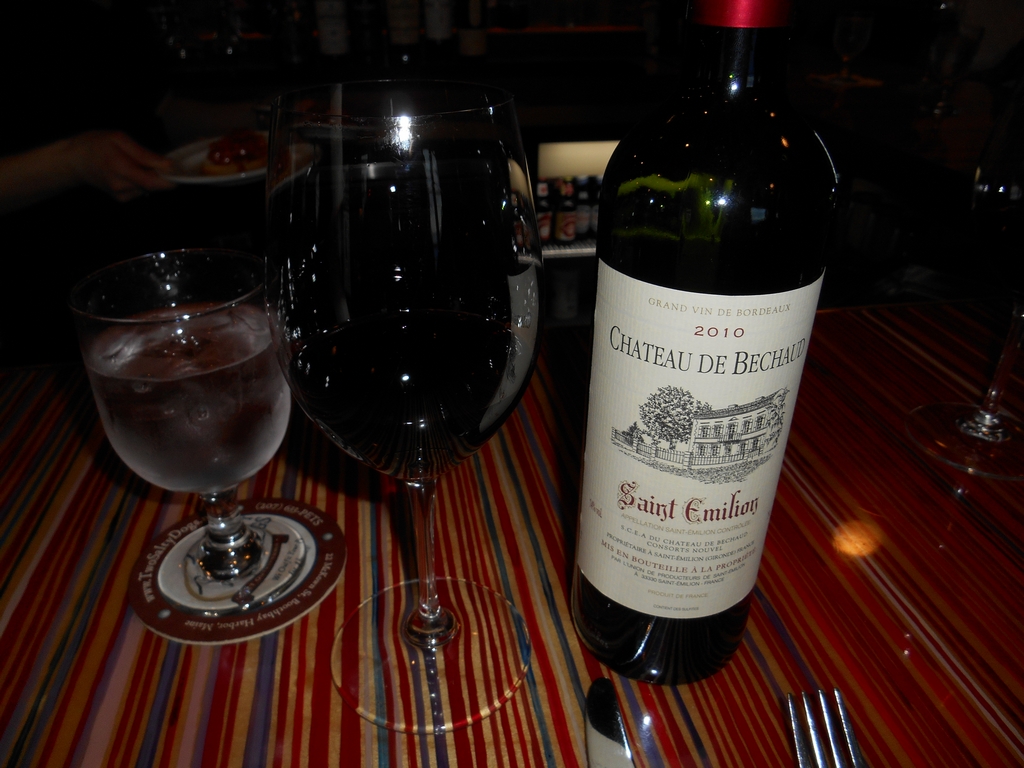 We were able to see Boothbay Harbor rush hour. 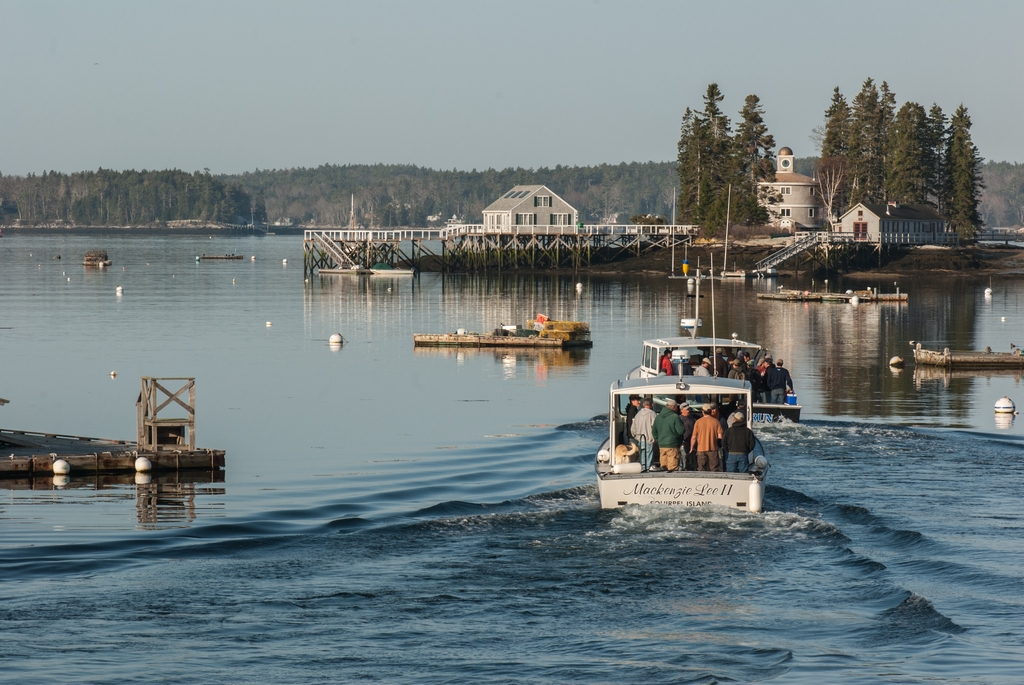 Across the inner bay is a walking bridge, which was a nice way to get form one side of the water to the other. 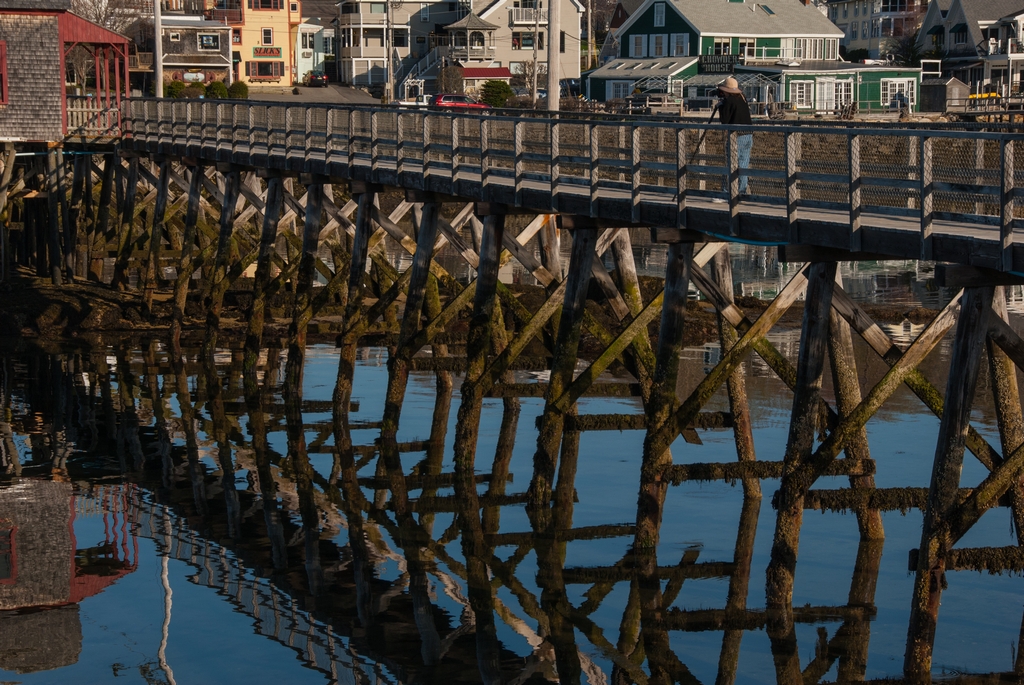 And in the middle of the bridge is a house!  It is for sale,, in case anyone is interested.  It actually looks like a very nice place, and surprisingly includes city sewer and water (according to the article). 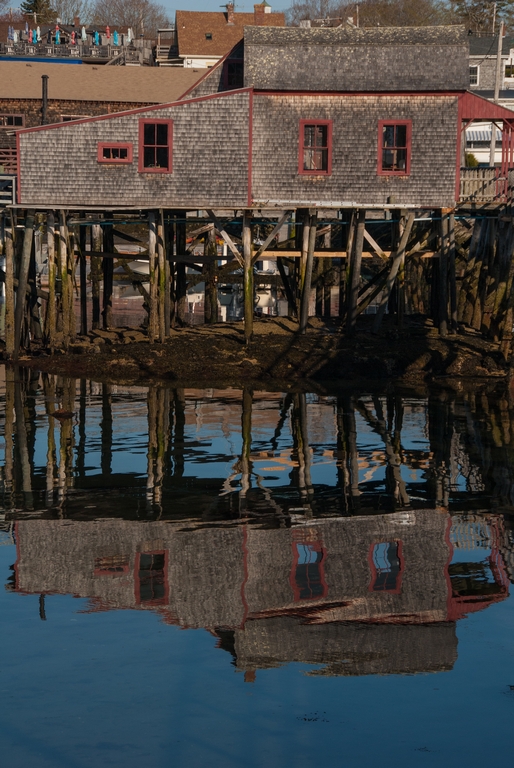 Boothbay was definitely getting ready for the summer season.  We saw a help wanted sign on an ice-cream shop, and some signs stating some stores would be opening the coming weekend.  The area will be hopping soon. 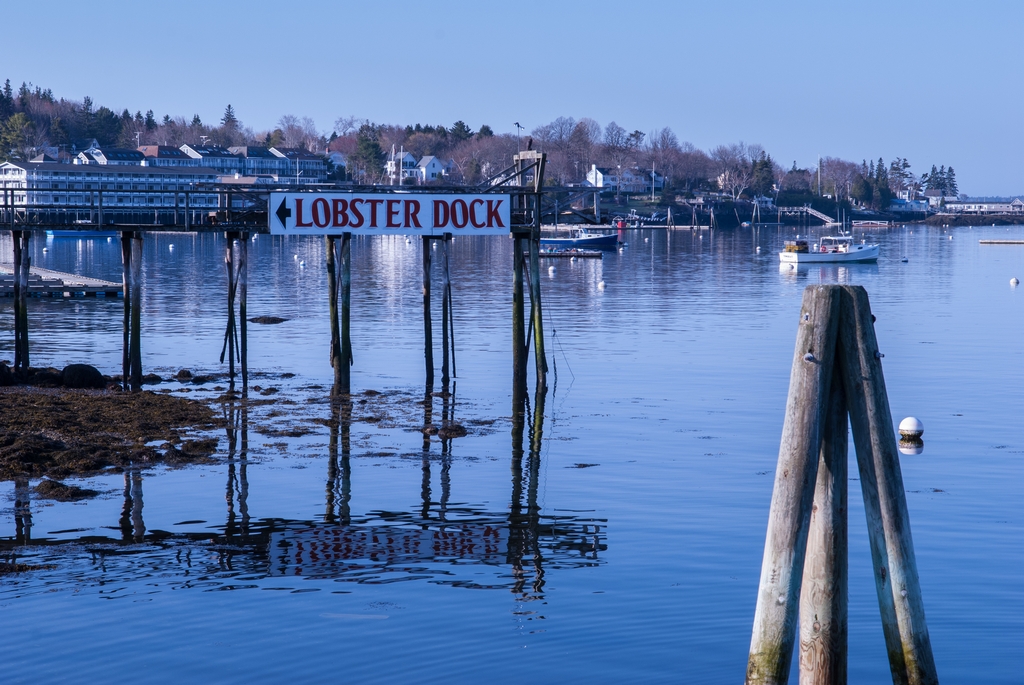 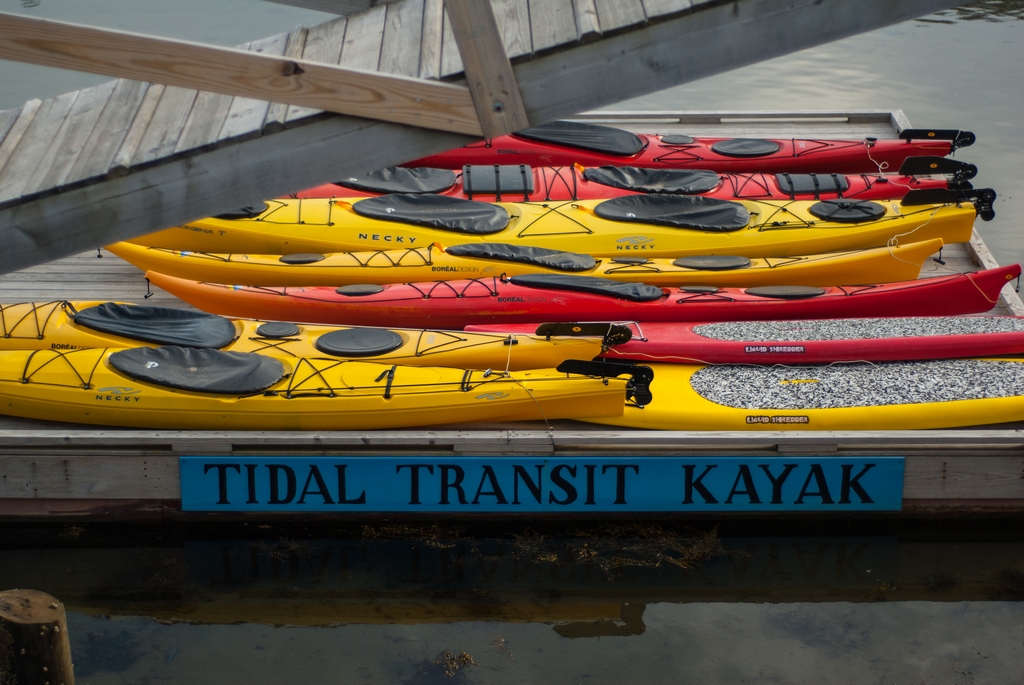 The library in town has an extremely creative statue in front.  It is a wonderful expression of the magic that reading can create.  It depicts a young boy, surrounded by books, on a flying carpet being taken off on an adventure of the imagination.  Around the base (which I am not showing here) are depicted a lantern and creatures that would be part of his adventures. 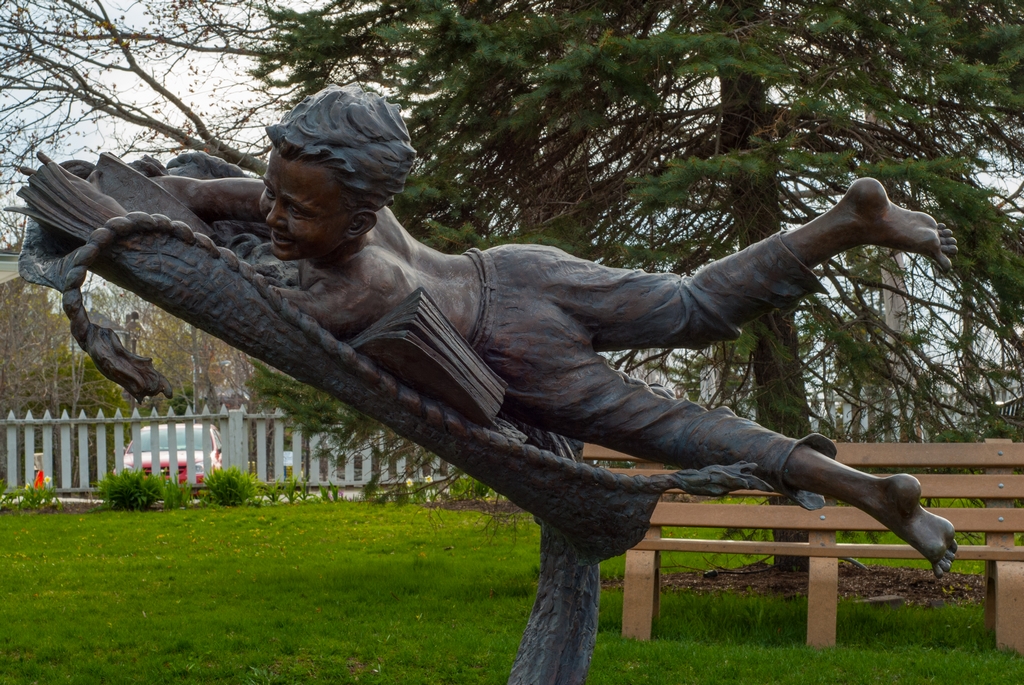 For the most part, Boothbay was quiet in early May. 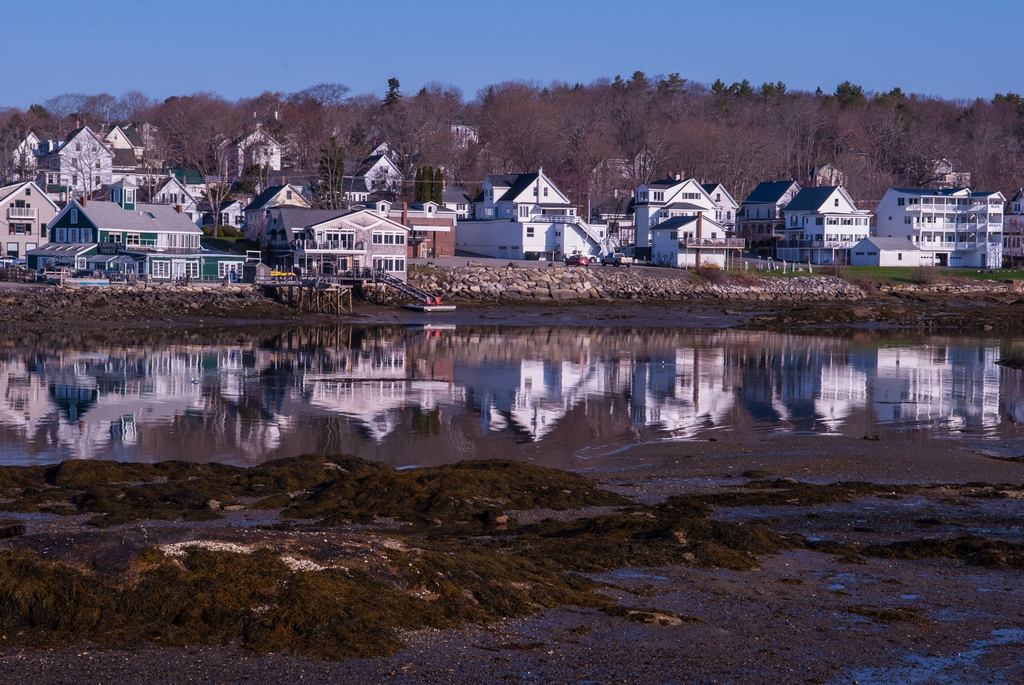 This view of downtown shows the water, the town, and - most importantly for this story - the Topside Inn.  It is the upper building on the right of this next photo. 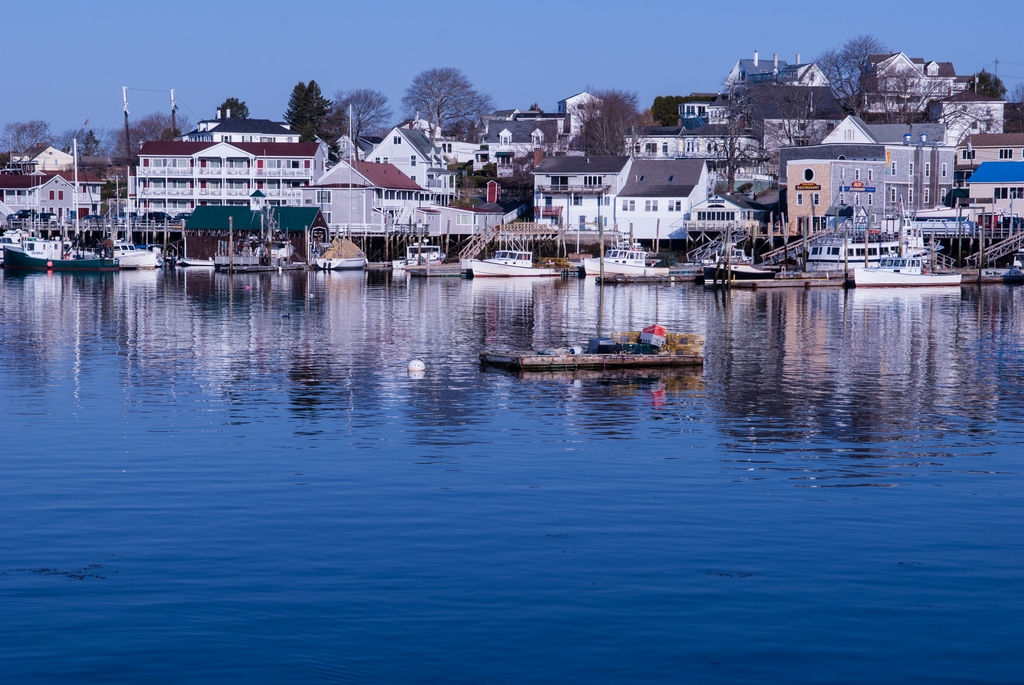 A lovely quiet time in the harbor.  You can't really see it here, but there is a Newfoundland dog in this boat. 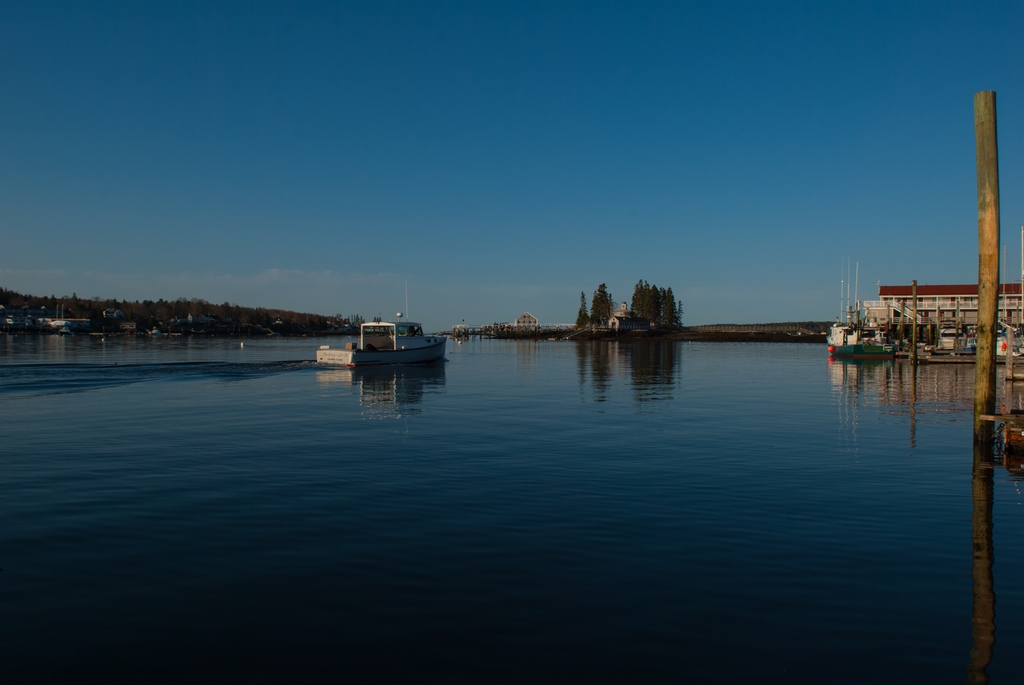 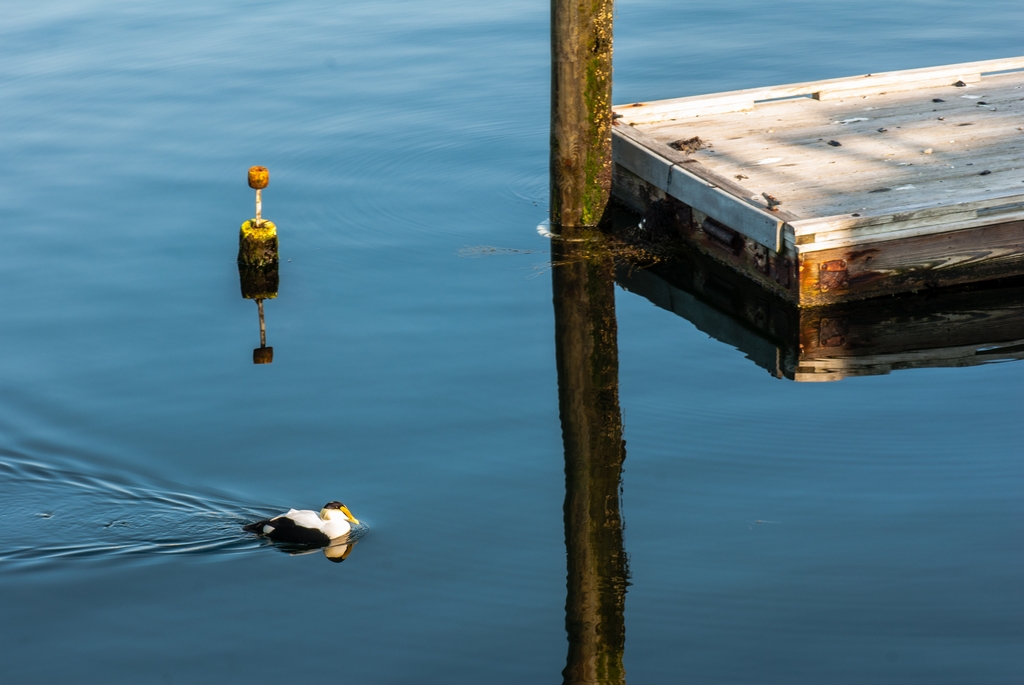 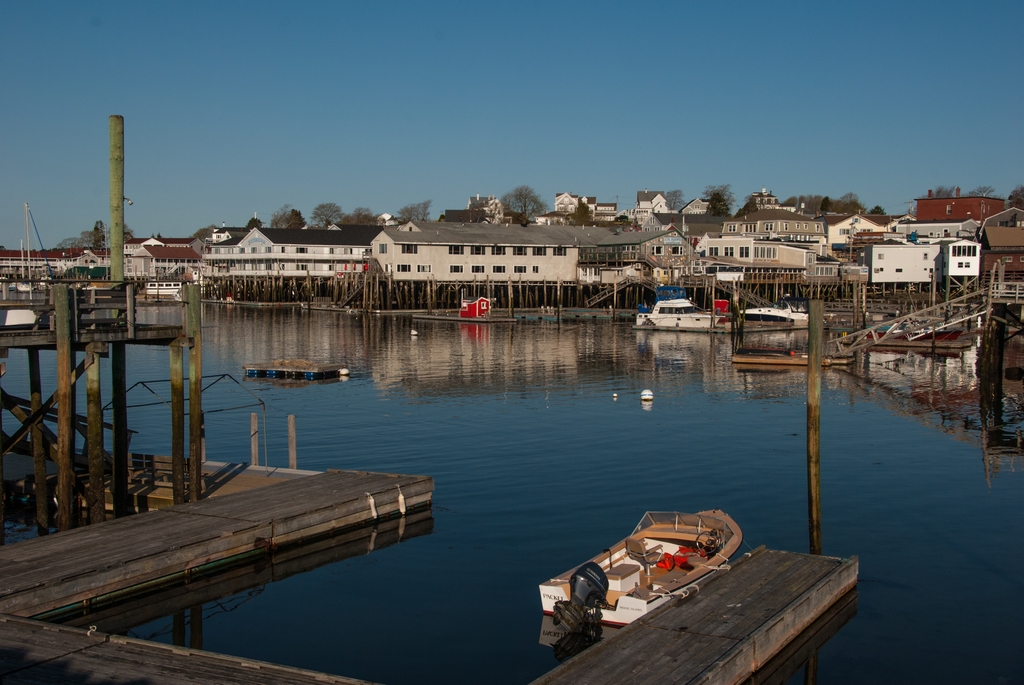