continued from page 3 of our November 2012 trip to Bar Harbor & Acadia National Park:

Just down the road from Sand Beach is more rocky Maine coast, including the famous Thunder Hole. There are some great thunderous booms that come from here, even on calm days. 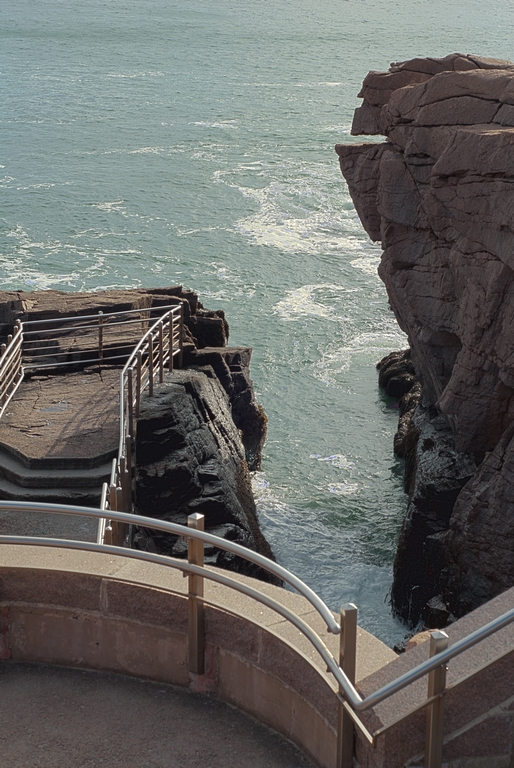 We took a lot of pictures in this general area, including some of us. 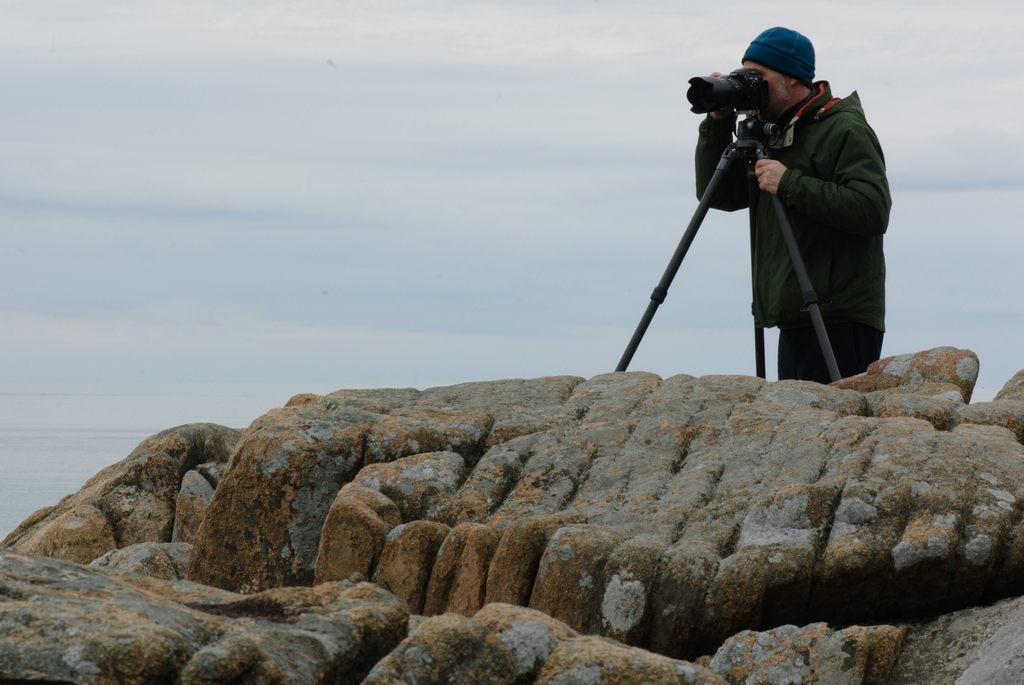 (This next picture is a painterly style HDR picture.  It really shows what the eye could see.) 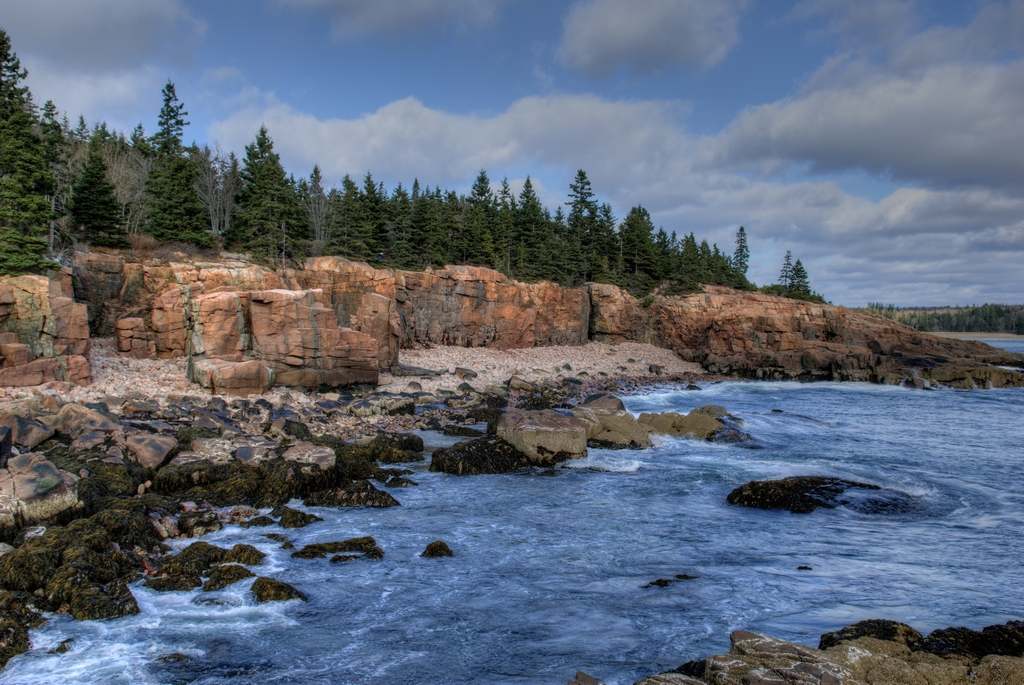 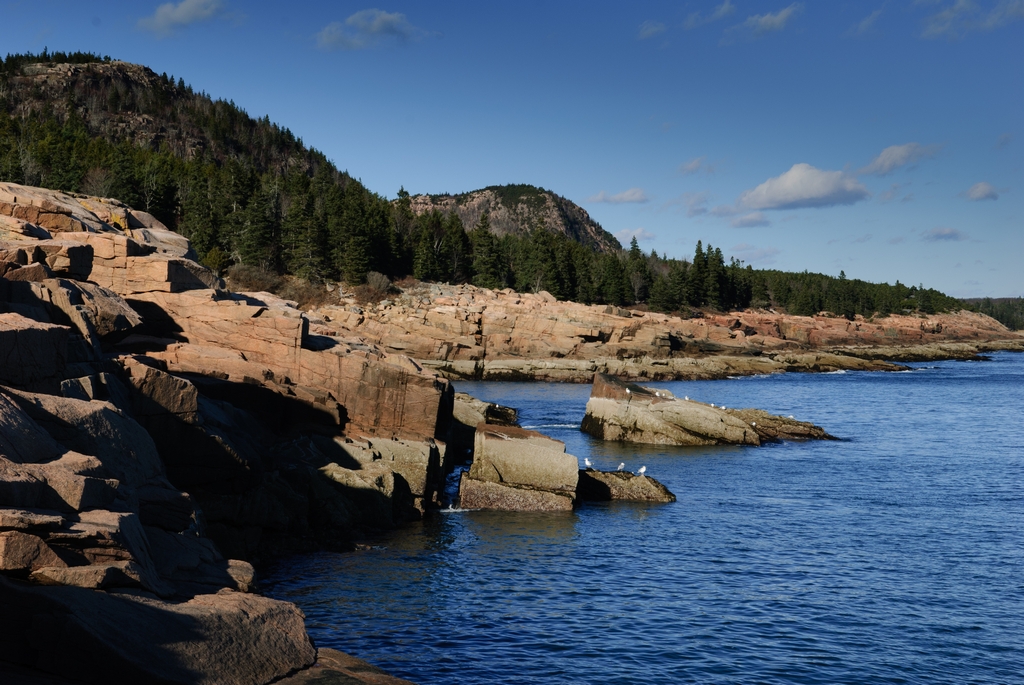 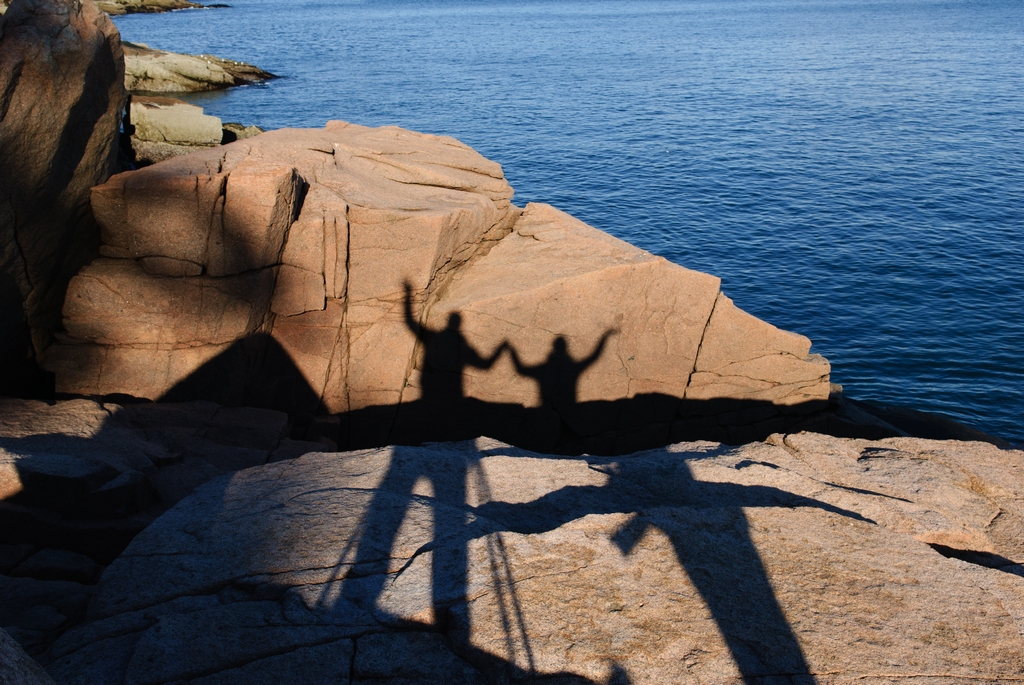 Along this stretch of shore it was obvious that birds like seafood.  They drop urchins on to the rocks to crack them open to expose the edible portion. 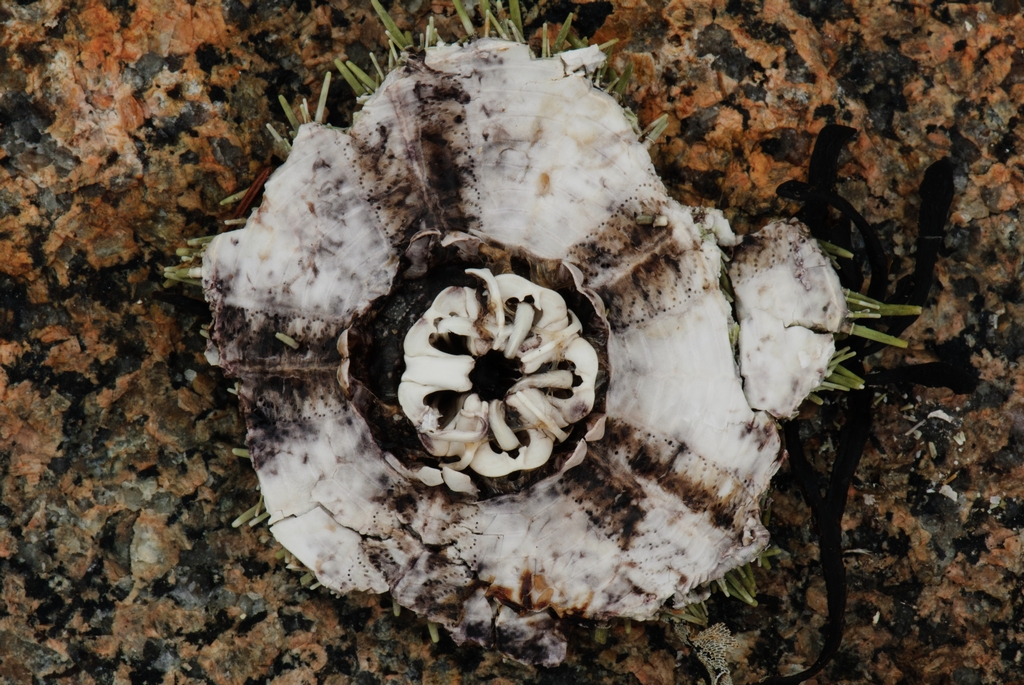 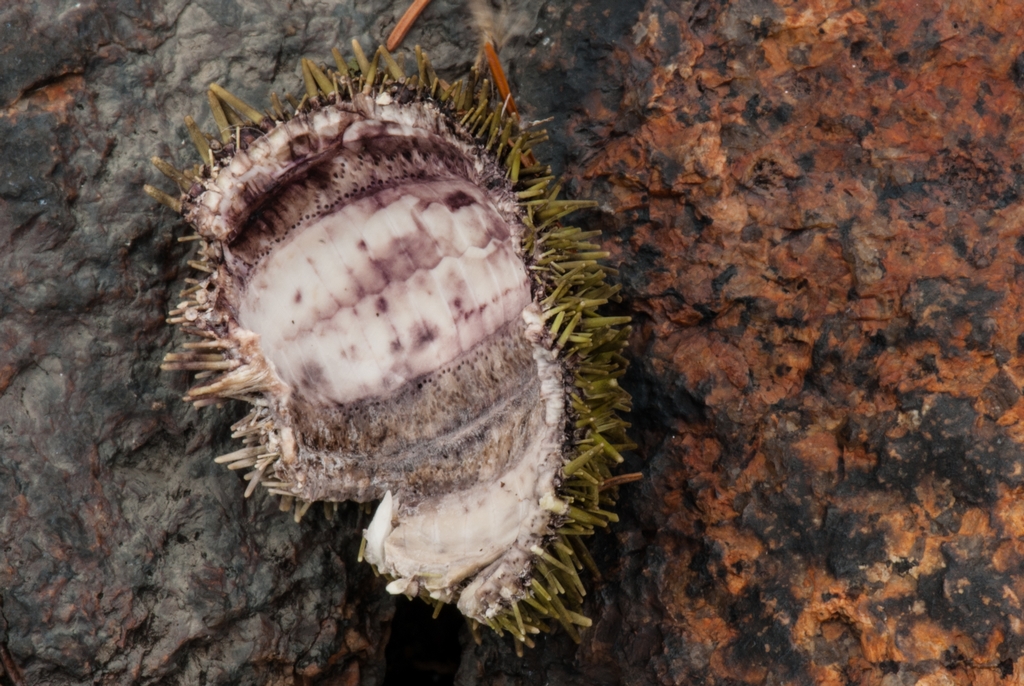 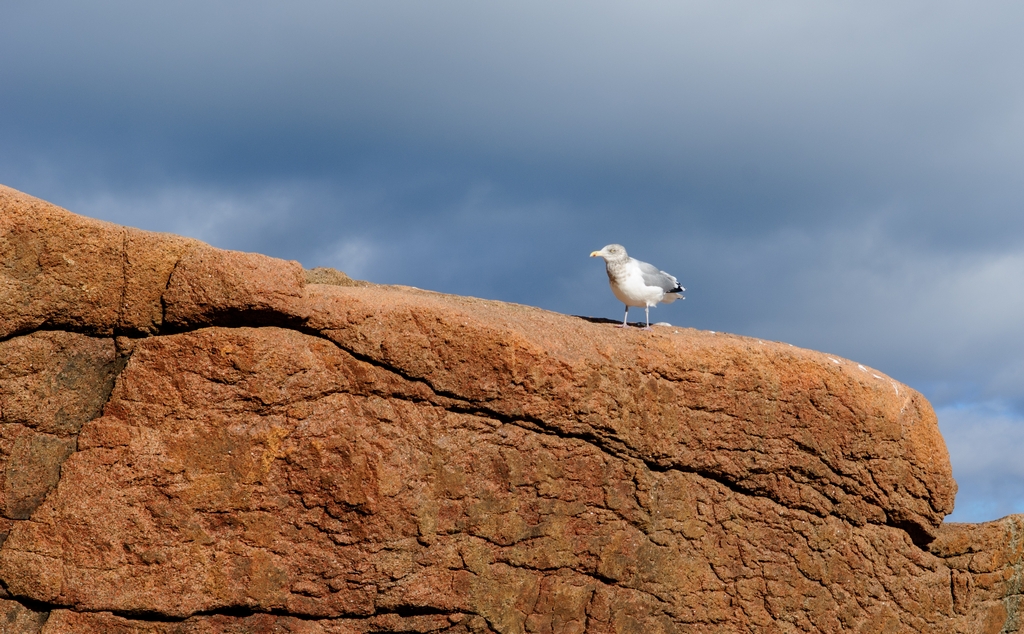 We were, of course, in Acadia National Park off season.  This meant few people, and unobstructed pictures.  However, it also meant we encountered a lot of this. 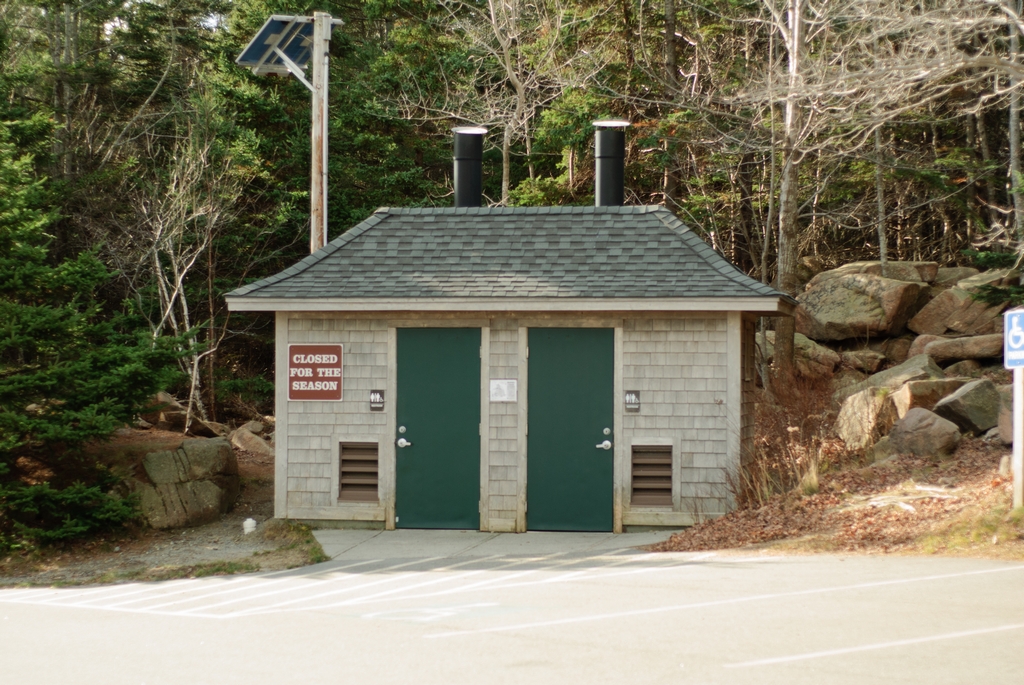 This next photograph is taken from Otter Cliff, looking back along the coast of Acadia National Park.  Great Head is on the right.  Moving left in the picture you can then see Sand Beach, and then Beehive Mountain.  Closer to where we are taking the picture you can see a short stretch of the park loop road; just before that we think is Thunder Hole. 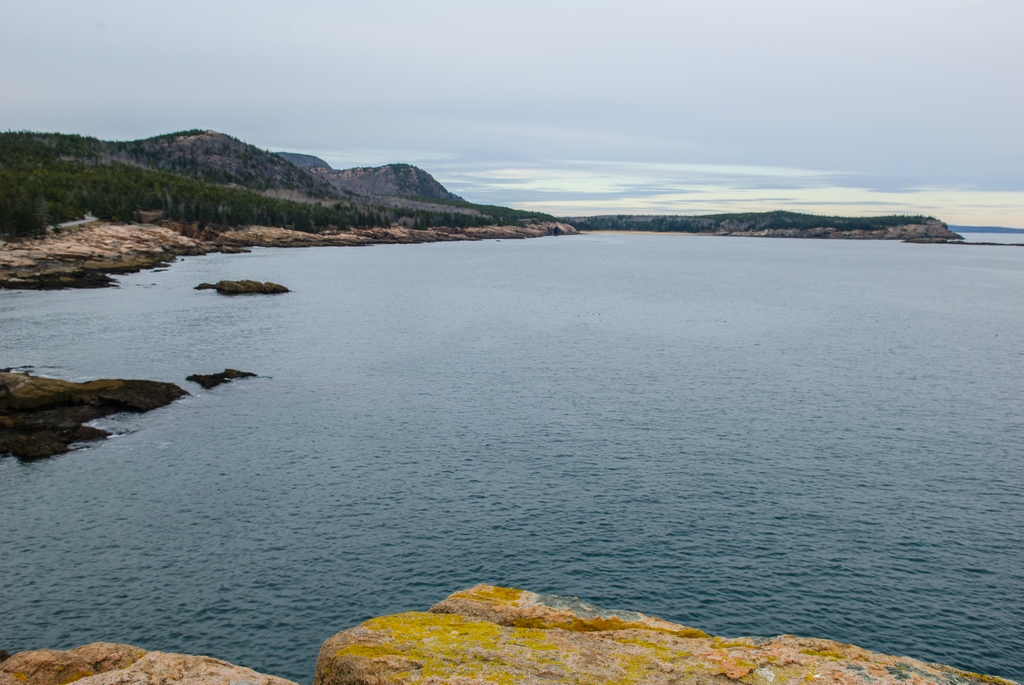 And this next picture is of where we were standing when we took the one above.  Otter Cliff is the steepest section of Otter Point. 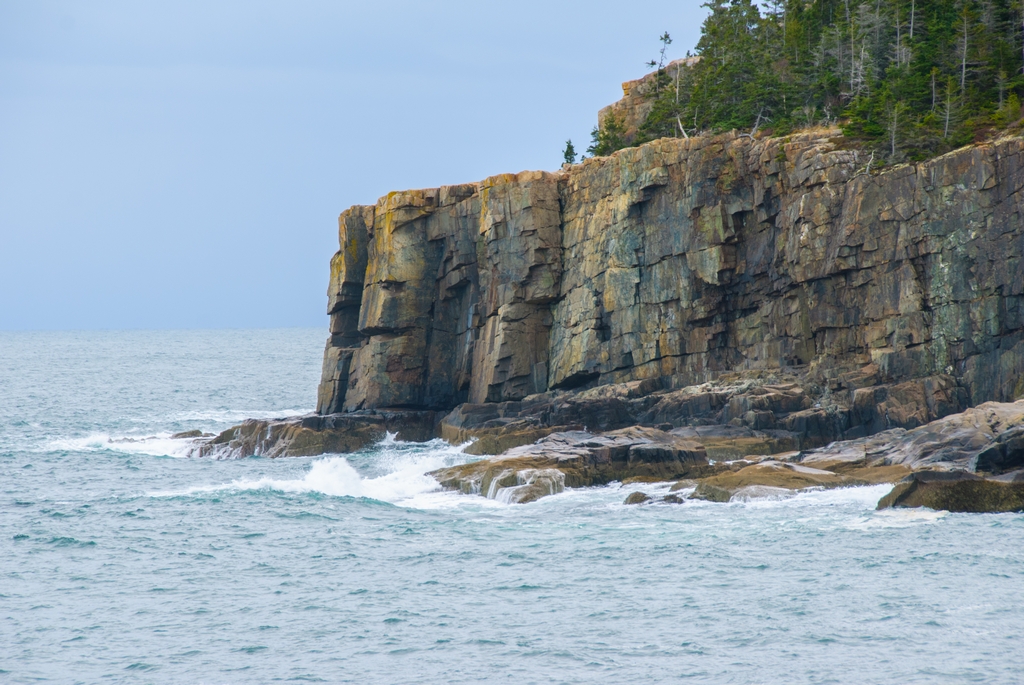 This is actually a popular spot for rock climbers; they even have some metal rings inserted in to the rocks for attachment of ropes.  It is also a popular object to photograph.  Mom M had given Paul a copy of Starstruck: The Fine Art of Astrophotography book, related to an exhibit that she & Anne went to see at Bates College.  One of the pictures in the book was a nighttime photograph of the sky over Otter Cliff.  So we decided to get out at night and take some pictures.  Our picture is a bit different, because there was a full moon during our vacation.  When looking at this next picture, keep in mind that this was taken at night.  Even with a full moon, it is very dark at night in the park.  (We had headlamps.)  It was also cold out.  The camera batteries did not last particularly long in this situation. 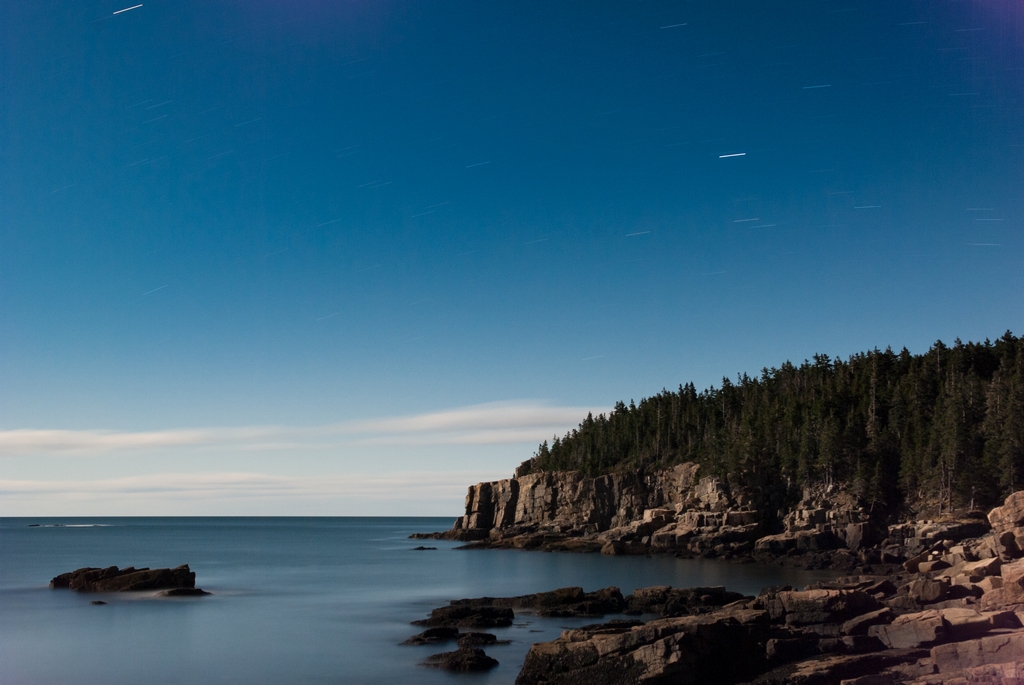 The 'lines' in the sky are star trails.  When there, at night in the dark, you can not actually see this much detail of the rocks and trees.  This (the star trails, and such a clear view of the cliff) is accomplished with a very long exposure (5 minutes 6 seconds).  We were also able to capture the moonrise, also using a longer than normal exposure (with very short start trails in it).  The solid light showing in the bottom left of the photo is Eggrock Lighthouse (from page 1 of this report).  And when the moon had risen higher, it provided a soft glow on the water. 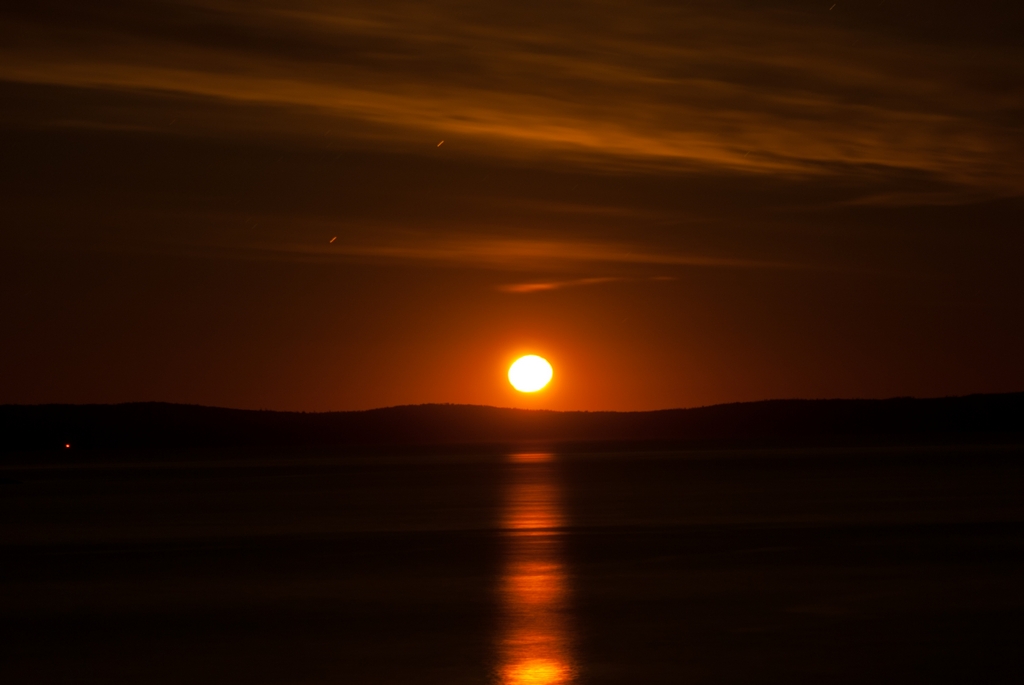 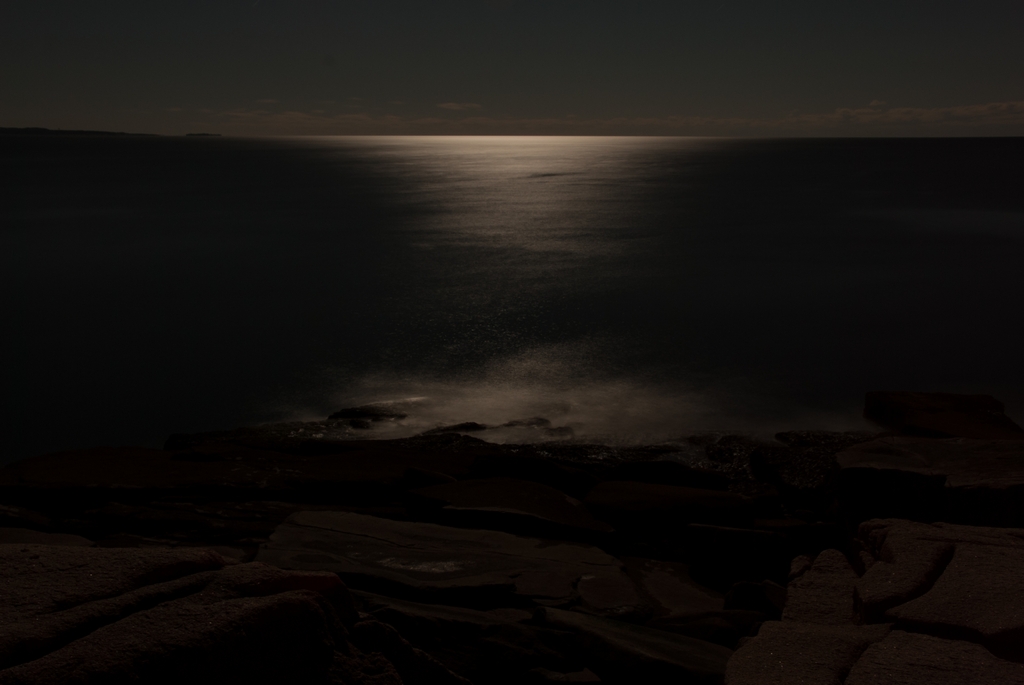 One of the nice things about being up on the rocks is that the birds are often flying level or even below where we were standing. 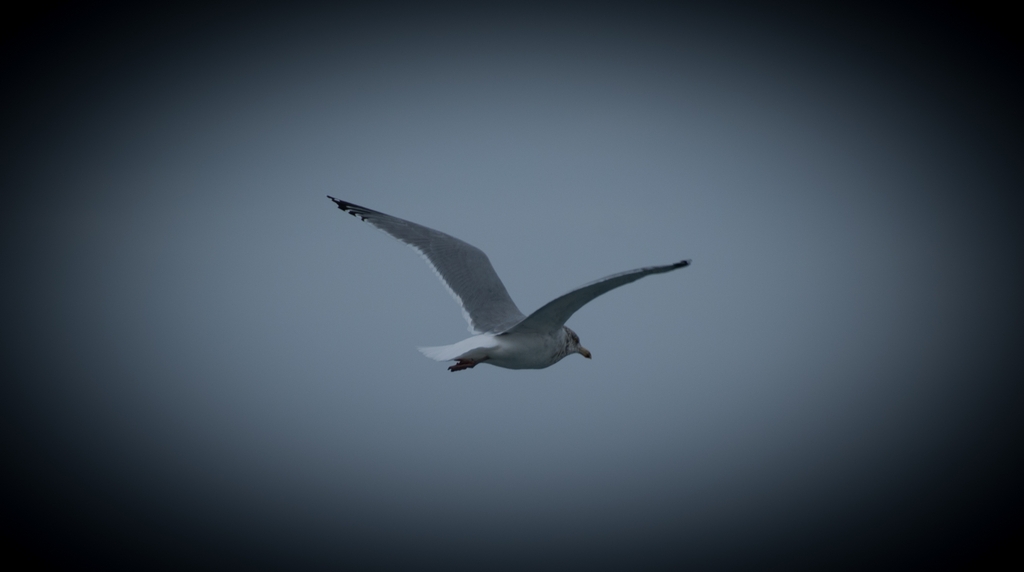 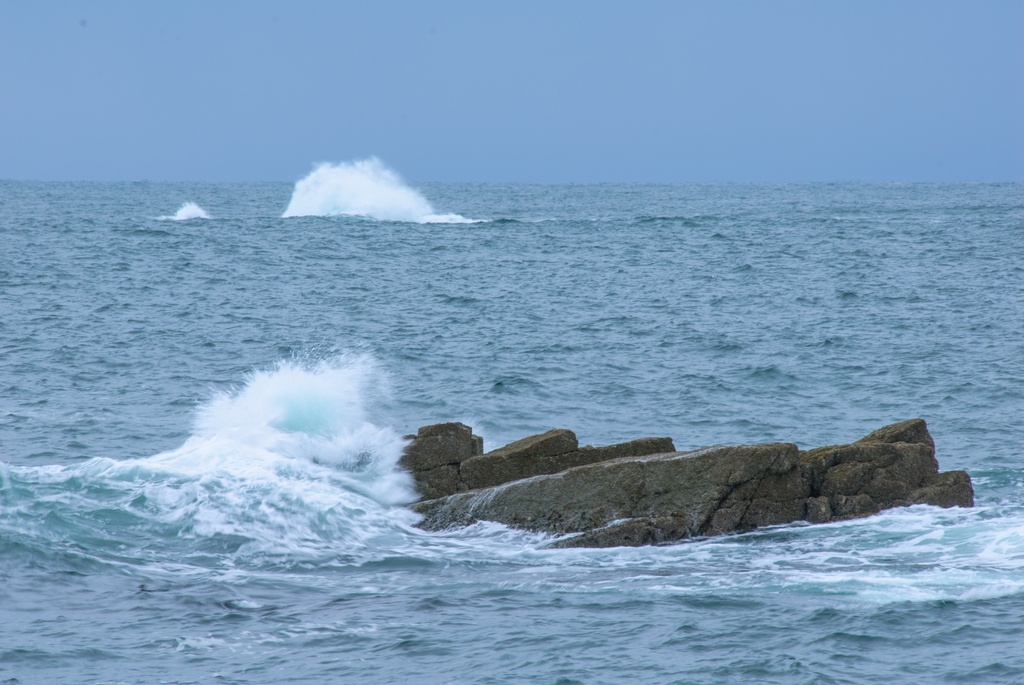 Acadia National Park also has the famous Jordon Pond House.  Of course, that was closed when we were there.  But we did walk the grounds and go visit Jordon Pond and see The Bubbles (the two mountains visible across the pond).  We saw multiple fairly freshly gnawed trees, and later learned that there is a beaver population boom.  It will be a problem come springtime, when they look for new places to live... the culverts under roads tend to be very popular with them. 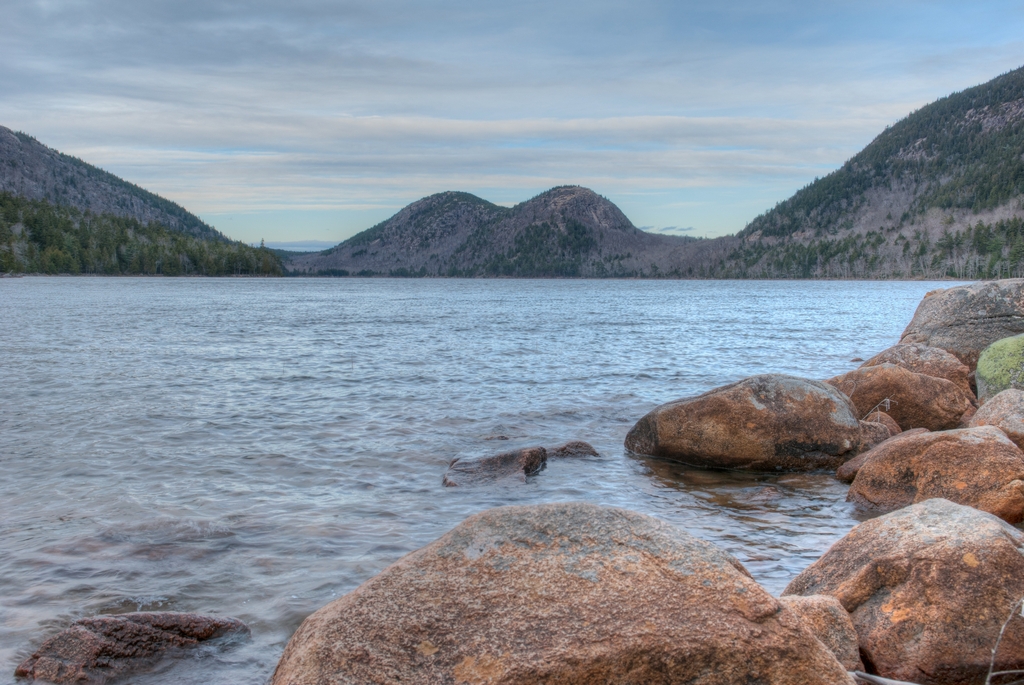 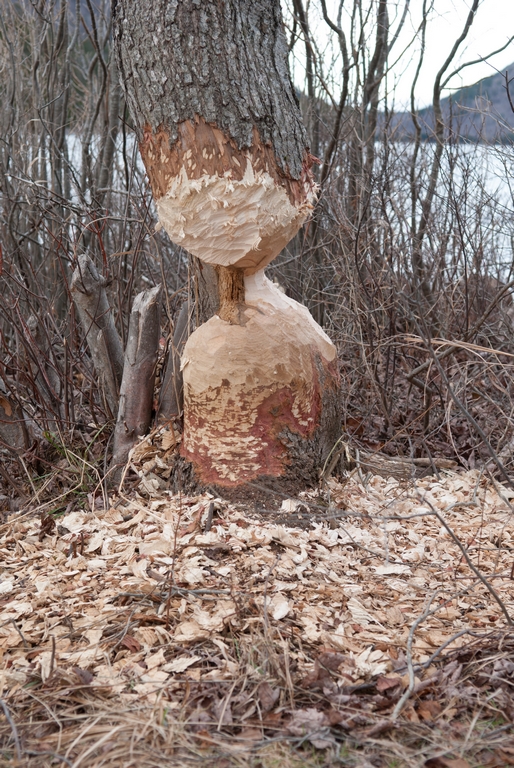 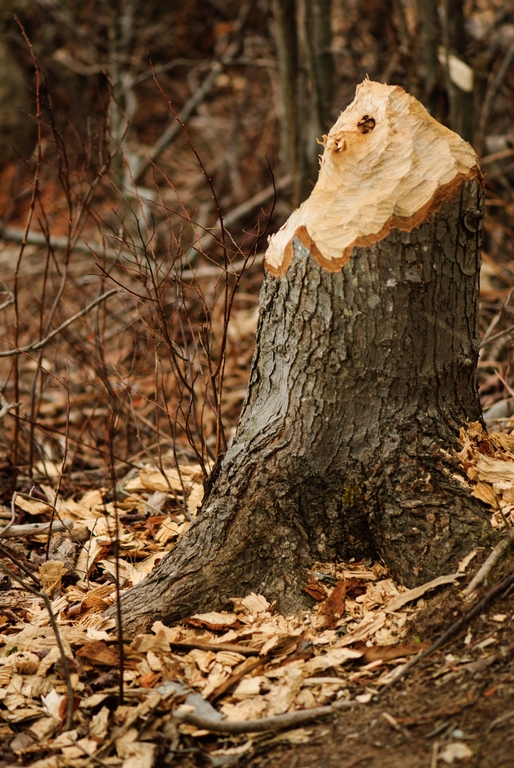 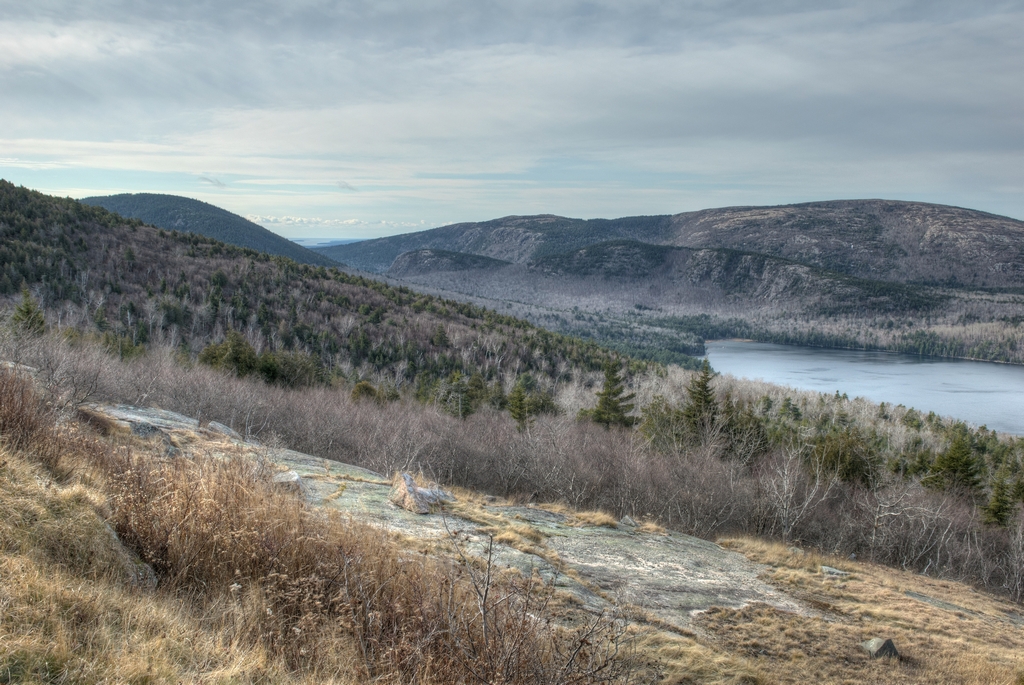 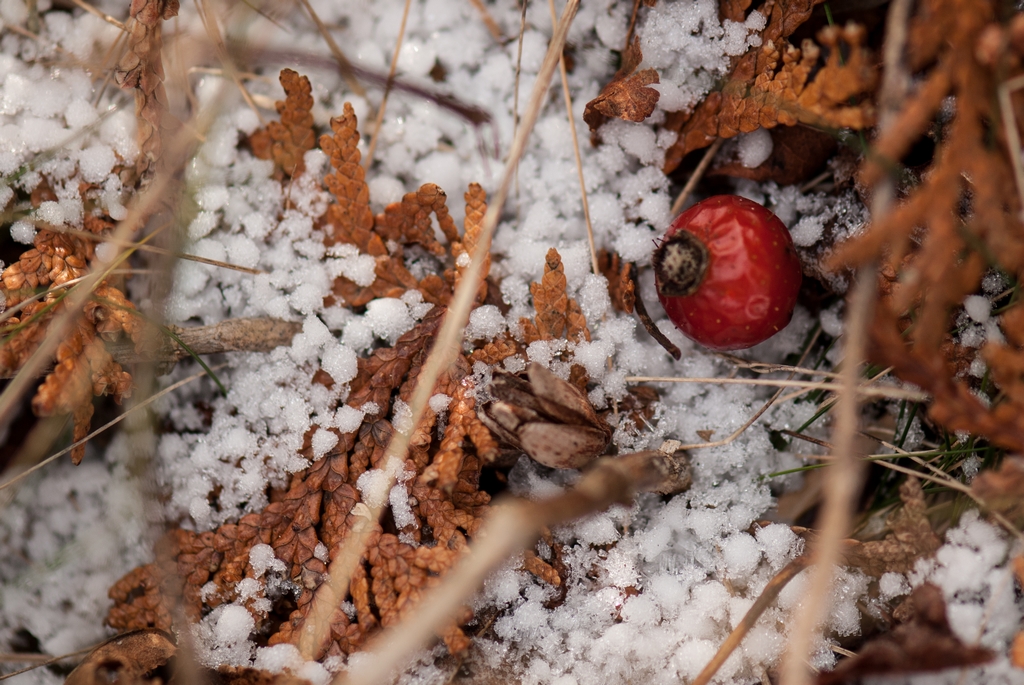 This is a view of Bar Harbor - both the town and the harbor - from the top of Cadillac Mountain. 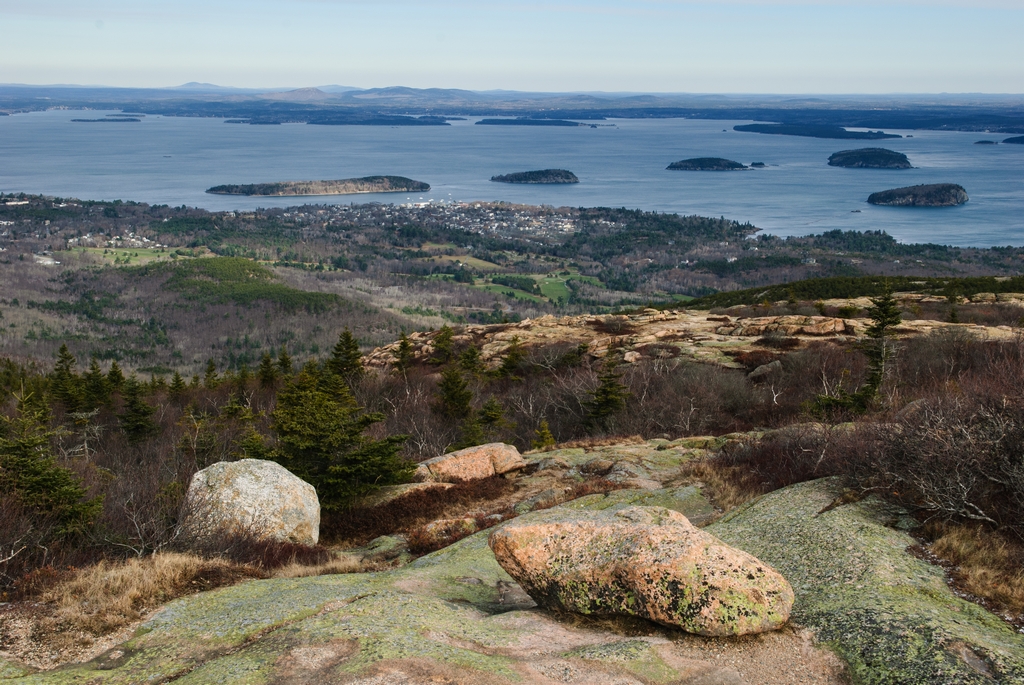 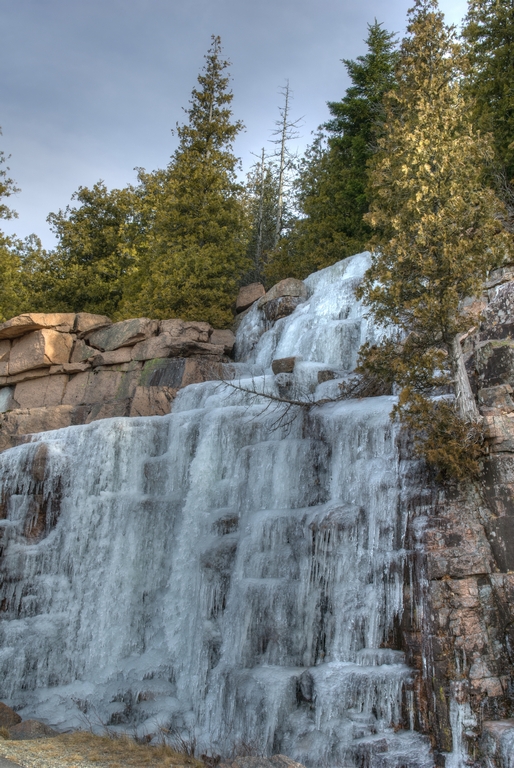 Looking East from the mountain top.  The peninsula that you see is Schoodic Point, which is also part of Acadia National Park. 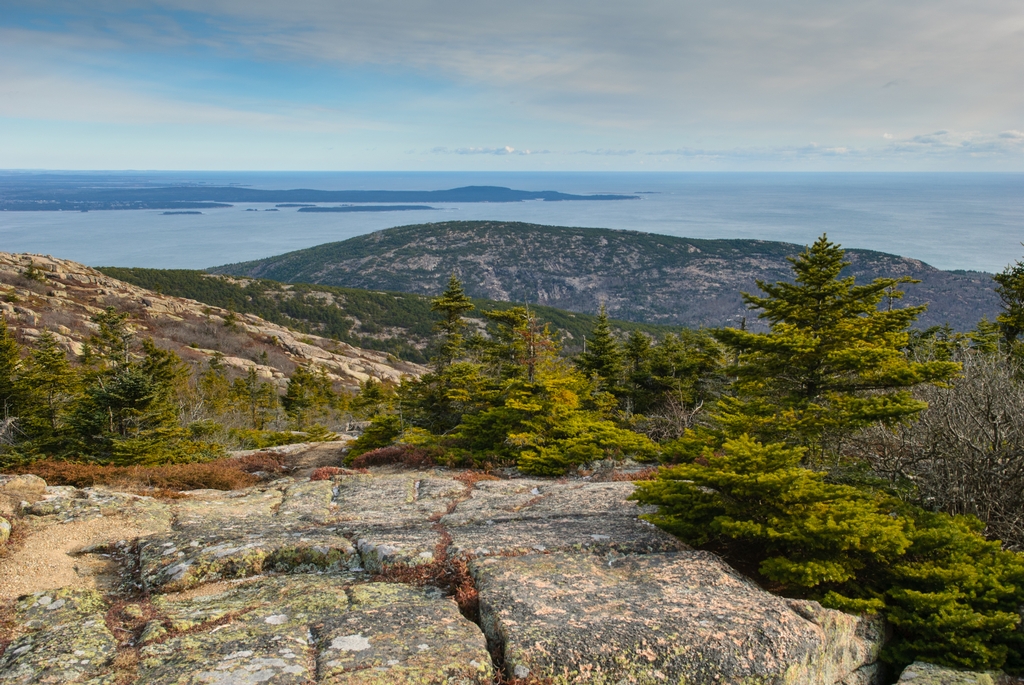 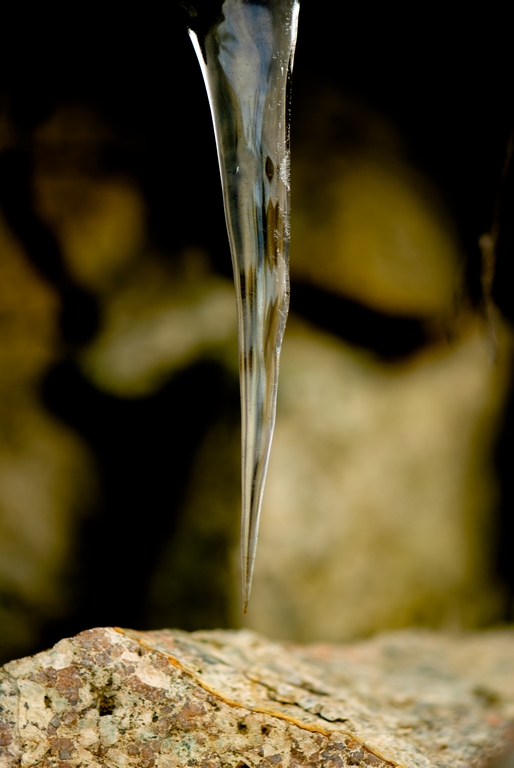